A capital of trust, cooperation and friendship. 10 years of the Auschwitz-Birkenau Foundation 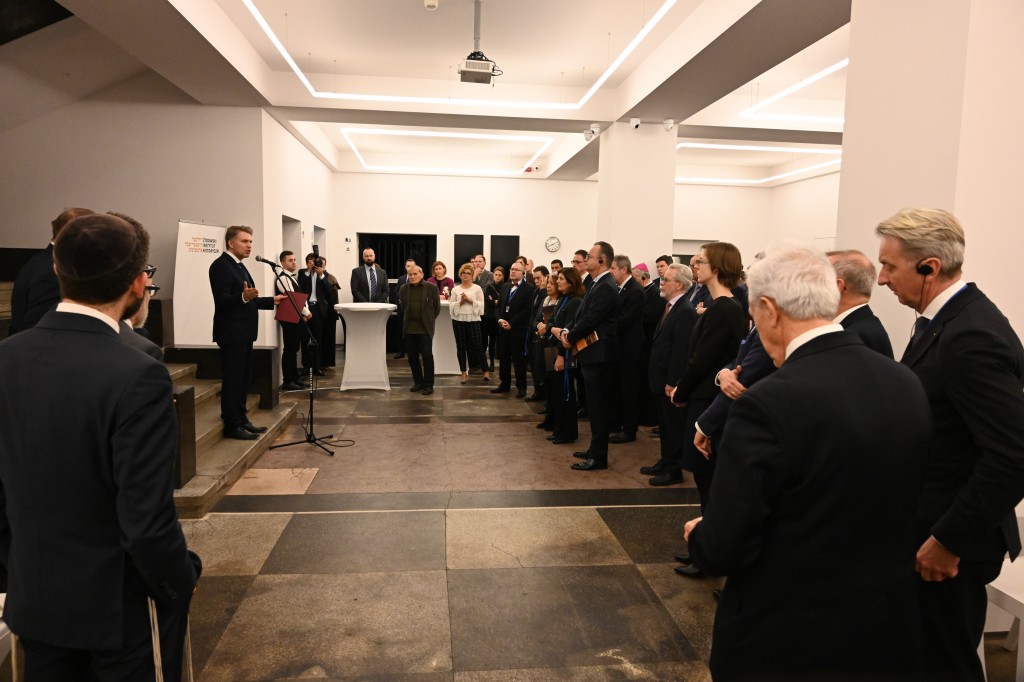 On December 6, at the Jewish Historical Institute, a ceremonial meeting was held to mark the 10th anniversary of the Auschwitz-Birkenau Foundation. The mission of the Foundation, established in 2009, is to preserve all authentic remains of Auschwitz-Birkenau. To this end, with the support of 38 countries and individuals, the Foundation creates and manages the Endowment Fund, and uses the resulting proceeds to finance the preservation of the Memorial Site.

The meeting was attended, among others, by former Auschwitz prisoner Janina Iwańska, Deputy Minister of Culture and National Heritage Jarosław Sellin, representatives of the Foundation's donor countries and members of its International Committee, members of the Council, Board and Financial Committee of the Foundation, as well as employees of the Auschwitz-Birkenau Foundation, the Auschwitz Museum, and the Emanuel Ringelblum Jewish Historical Institute, whose director, Prof. Paweł Śpiewak welcomed all those present at the meeting.

After his welcome address, former Auschwitz prisoner Janina Iwańska took the floor. ‘Today at the Memorial, we can see crowds of people, dozens of guides, with whom I also met. They meticulously tell us about the history of Auschwitz. The Auschwitz-Birkenau Foundation has done a great deal and is worthy of the greatest praise and respect because it is only recently that I have seen how many people visit the memorial and how interested young people are. It is important not only as a remembrance but also as a warning because times are bad. People have to realize what a person can do to a fellow human,’ she said.

“The sense of responsibility for the present and future generations requires not only the preservation of historical memory but also the protection of material, silent witnesses to the tragic events that took place in this extermination camp. Memory does not serve the purpose of scratching wounds, but to draw conclusions from the past for the sake of prosperity. The barracks, crematoria, and gas chambers that can be seen today in Auschwitz-Birkenau are a significant challenge for us to respond to violence ‘built on hatred and contempt for man in the name of a deranged ideology’ - as St. John Paul II said 40 years ago” - wrote Cardinal Pietro Parolin, Vatican Secretary of State in a special letter addressed to the participants of the meeting.

“Holy Father Franciszek thanks the Board of the Foundation, all its donors and entities, especially Polish entities, who cooperate in preserving the historical truth and the physical traces of the Auschwitz-Birkenau tragedy,” the letter reads.

Deputy Minister Jarosław Sellin underlined that from the very beginning the Polish state had a feeling that it was necessary to care for the sites marked by the greatest crime in the history of humanity, especially the Holocaust. ‘Several years ago, the idea was born that the most symbolic place for this crime, Auschwitz-Birkenau, is a place for which the international community should take responsibility. For this reason, the Auschwitz-Birkenau Foundation was established,’ he said.

‘Two years ago, at a meeting held in Wannsee, the international preservation community adopted a special memorandum in which Auschwitz-Birkenau is indicated as the model for a well-tended Memorial, where a museum dedicated to the subject of remembrance is perfectly cared for,’ said Minister Sellin.

The President of the Foundation and the director of the Auschwitz Museum Dr. Piotr M. A. Cywiński thanked for the support provided to the Foundaton for a decade: ‘I would like to warmly thank everyone: the diplomats, businesses that supported us, people who, at various stages, joined various structures of the Foundation, such as the Financial Committee, the Board and the Council. We would not have done this without great help from many places’

‘We have the prospect of preserving authenticity. The time has come for us to think about how to carry on with education and the voice of Auschwitz into the world. There is a deep need to re-read our common dramatic experiences from the past,’ said Piotr Cywiński.

The Head of the Foundation Council, Marek Zając, recalled the words of the founder of the Foundation, Władysław Bartoszewski: ‘The professor often repeated that the most wonderful period in his life was his experience working in the Council to Aid the Jews, Żegota. He never experienced such a sense of brotherhood and activities between divisions. Żegota are Poles and Jews, believers and non-believers, peasants, socialists, conservatives, Christian Democrats, the young generation and people at the end of their lives. They were all in perfect agreement because they knew they were serving something more important. I can confirm with all my might that the Auschwitz-Birkenau Foundation is a reflection of those experiences. We have built capital of trust, cooperation, and friendship’.

Earlier that day, at the invitation of the Auschwitz-Birkenau Foundation, the site of the former German Nazi Auschwitz concentration and extermination camp had been visited by German Chancellor Angela Merkel and Polish Prime Minister Mateusz Morawiecki. Angela Merkel announced that German support for the Foundation would double from 60 to 120 million euros.

Initially, the Fund created by the Foundation was to amount to EUR 120 million, such that the annual interest on this amount, that is, about EUR 4-5 million, would enable the implementation of the Master Plan for Conservation, developed by specialists, i.e. a full, multi-annual program of restoration works at the Auschwitz Memorial.

Given the economic situation and, above all, the current bond yields, the amount of the Fund was raised to EUR 180 million so as to raise the projected level of profits that would enable the Foundation to preserve the authenticity of Auschwitz without increasing the investment risk.

On the occasion of the 10th anniversary of the Auschwitz-Birkenau Foundation, a book was published entitled "The Auschwitz-Birkenau Foundation. Genesis, Development, Future" edited by Wojciech Soczewica and Adam Szpaderski. To highlight the most important issues of the past 10 years, interviews with the Foundation’s key players, who shaped the process, facilitated the building of the Perpetual Capitalon state, corporate and individual level and will continue safeguarding the Holocaust Victims’ and Survivors’ testimony in the years to come.