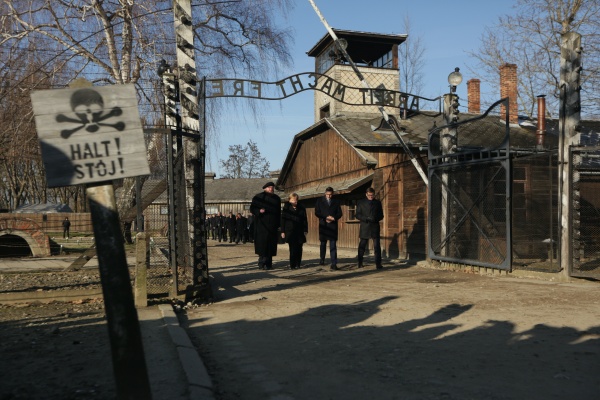 The fact that German support for the Auschwitz-Birkenau Foundation celebrating the 10th anniversary of its creation doubled from 60 to 120 million euros was announced at the Auschwitz Memorial by Angela Merkel, the Chancellor of Germany. On December 6, Merkel visited together with Prime Minister Mateusz Morawiecki, the site of former German Nazi concentration and extermination camp Auschwitz.

The meeting, organized to commemorate Foundation’s anniversary in the historical Sauna building at the former Auschwitz II-Birkenau camp, was attended by official delegations from Germany and Poland together with among others Auschwitz Survivors, President of the World Jewish Congress Ronald S. Lauder, diplomats, representatives of Jewish communities with Chairman of the Central Council of Jews in Germany Dr. Joseph Schuster, representatives of the Roma Community with Romani Rose, Head of the Central Council of German Sinti and Roma, members of the Management Board, International Committee as well as Financial Committee of the Auschwitz-Birkenau Foundation, together with the staff of Auschwitz Museum including the Master Plan for Preservation.

The mission of the Auschwitz-Birkenau Foundation, established in 2009, consists of securing all authentic remnants of Auschwitz-Birkenau. For this purpose, thanks to the support of 38 states as well as individuals, the Foundation creates and manages the Endowment Fund. The income earned is used for financing conservation at the Memorial.

Initially, the Fund was supposed to amount to 120 million euros so that annual interest on it, ca. 4-5 million euros, could finance the realization of Master Plan for Preservation developed by experts and constituting a comprehensive and long-term program of conservation works at the Auschwitz Memorial.

In connection with the economic situation, and in particular current yield, the Fund was increased to 180 million euros in order to achieve the forecasted level of profit, making it possible to secure the authenticity of Auschwitz without increasing investment risk. At the very beginning of the Foundation’s activity German federal government, together with states supported the Foundation with the amount of 60 million euros. Now it was decided to double the support.

Former Auschwitz prisoner Bogdan Bartnikowski was the first to take the floor during the ceremony on the occasion of the Foundation’s 10th anniversary. He spoke about his experiences at the Sauna building.
‘On August 13, 1944, a large group of women and children deported here from insurgent Warsaw walked to this Sauna in the evening. The first words we heard were addressed to us, children: “Kleine Polnische Banditen aus Warschau”. I was among them, a 12-year old boy. I wanted to be with my mother as long as possible. I managed to get to a group of younger children and women who were directed to the Sauna in the evening. For a dozen or so days we had no possibility of washing ourselves, we lived in cellars protecting ourselves from air raids. When we entered the Sauna, we were ordered to undress. It was a shock for me. I had to undress in front of the crowd of women. My mother was next to me. I didn’t know what to do with my eyes, so I wouldn’t see those naked women around me,” said Bogdan Bartnikowski.

‘Every now and then someone touched me, and I saw naked women, breasts, buttocks, and I couldn’t move away. There was no room. Slowly, step by step, we were moving. Finally, I saw a row of prisoners who are shaving women. They also cut my hair. I covered my childish masculinity with my hands but a prisoner with a razor tore off the hands, she hit me in my back and I went further. There was no soap, no hot water, no possibility of drying. We were taken to the next room. We sat naked all night long. I wanted to be close to my mother, but at the same time I wanted no one to touch me, not even her. On the next day, we were taken to the women’s camp, to the children’s block, where they kept around 350 children under 14. This was my first impression of the building of the Sauna,” said the former prisoner.

“I would like to congratulate and express my words of appreciation to the authorities as well as all individuals and institutions which contribute to and support the activity of the Foundation. Thank you for fulfilling the mission of preservation for future generations of this shocking place of torture and memory of over a million victims of German Nazi concentration and extermination camp”, wrote President of Poland Andrzej Duda in his letter addressed to the participants of the meeting.

“Soon, on January 27, on the 75th anniversary of the liberation of the Auschwitz-Birkenau camp, Survivors and representatives of state authorities from many different countries will gather here. Together, we will show our determination in defending the memory and truth about the Holocaust. In this way, we will express our joint responsibility for the future. I am deeply convinced that we will also manifest our will to pass the message and warning coming from Auschwitz-Birkenau on to future generations”, President Duda wrote.

Polish Prime Minister Mateusz Morawiecki said: ‘Today people who are witnesses of those terrible times are passing away. Today we heard one testimony told movingly. This makes us all the more obliged to preserve this memory because if memory goes away, it is as if we hurt people who had gone through unimaginable suffering and hell the second time. Emmanuel Levinas said that a lack of memory is a re-affirmation of the right of evil against good. Today, we must preserve the memory as if we were taking care of those people. Therefore, we try to preserve all such Memorials.’

German Chancellor Angela Merkel said it was not easy for her to speak in this place. ‘It is difficult for me. I am deeply ashamed of the barbaric crimes perpetrated by the Germans, crimes that transcend all imaginable boundaries. Actually, one should be silent from the horror of what was done to men, women and children in this place. Which words could express the pain of all the people who had been humiliated, tortured, and murdered. At this point, however, silence cannot be the only answer. This place obliges us to preserve the memory,” she said.
‘Oświęcim is located in Poland, but in October 1939, it was annexed by the Third Reich. Auschwitz was a German extermination camp run by the Germans. The perpetrators must be clearly named. We, Germans owe it to the victims and to ourselves. Reminding people of the crimes, naming the perpetrators and commemorating the victims with dignity is a never-ending and non-negotiable responsibility. Awareness of this responsibility is a constant element of our national identity,” she added.

The Chancellor emphasized that this place is a testimony, and the testimony should be preserved. ‘Ten years ago, former Polish Foreign Minister Władysław Bartoszewski, who had been himself a political prisoner at Auschwitz, initiated the establishment of the Auschwitz-Birkenau Foundation. Dear Director Cywiński, I wholeheartedly thank you and all those who have undertaken the task of preserving this place as a monument, the warning and the documentation center. I would like to thank everyone involved in conservation projects. Conservation plans require much greater perpetual fund. Yesterday, together with the Prime Ministers of the Länder, we made this decision,” stressed Angela Merkel.

The Museum Director and President of the Auschwitz-Birkenau Foundation Dr. Piotr M. A. Cywiński spoke about two authenticities that are extremely important to us: “The message to the new generations of this very difficult memory is combined in Auschwitz in two spheres of authenticity: the incredible authenticity of the words, such as those we heard today from Bogdan Bartnikowski, and the authenticity of the site. Those authenticities need each other. If someone reads a book, a testimony, memoirs of a victim who went through this camp and then sees this place, that person understands. 10 years ago this conviction was the reason of the thought that we must find a solution to preserve everything that had not been built for a long time. Today we know what the meaning of this in our post-war Europe and the world is, and this will not change in one or two generations’ time.'

‘Due to changing economic realities, two years ago, we presented the alternative: either we raise the investment risk, or we increase the Fund, because the world is not wait. Germany’s response today is the first response to this challenge, and I am deeply grateful for it. We are doing this for our common future. The keys we have are than memory and reconciliation,” said Director Cywiński.

At the end of the meeting, Angela Merkel and Mateusz Morawiecki made their entries into the Museum memory book and had a short meeting with Survivors.

During their visit at Auschwitz I site the guests saw the building of the first gas chamber and crematorium as well as an important fragment of museum exposition, among others Block 4, where basic information on the people deported to Auschwitz: Jews, Poles, Roma, Soviet POWs and the representatives of other nationalities and groups incarcerated by the Germans in the camp, can be found. One can also see there the model of the gas chamber and crematorium II from Birkenau, Zyklon B cans, as well as human hair cut from the heads of the victims.
In Block 5 the guests saw personal items belonging to the victims of the Shoah, discovered in these warehouses after the liberation of the camp. They included shoes, suitcases, prostheses, glasses, combs or kitchen utensils.

By the Death Wall in the yard of Block 11, where the German shot ca. 5.5 thousand people, mainly Poles, prisoners incarcerated in camp arrest and so-called police prisoners sentenced to death by gestapo summary court, Angela Merkel, Mateusz Morawiecki and the representatives of Auschwitz-Birkenau Foundation laid wreaths and candles to commemorate all victims of the camp.

Before the ceremony in the Sauna, the Chancellor of Germany and the Prime Minister of Poland visited Conservation Laboratories of the Memorial. They were accompanied by Ronald S. Lauder. Thanks to his support, in June 2003, it was possible to create a modern Laboratory within the Memorial. Ronald Lauder is the President of World Jewish Congress and heads the Auschwitz-Birkenau Memorial Foundation (USA), involved in the USA, in supporting the mission of the Auschwitz-Birkenau Foundation. He is also one of the donors of the Foundation – Pillars of Memory.

“Antisemitism remains a vile, pervasive and resurgent force in the world today, making Holocaust education more vital than ever. Chancellor Merkel has been a valued and reliable ally in the fight against this oldest of hatreds. Preserving and conserving the remains of the Holocaust are critical to maintaining an accurate record of the atrocities committed, especially as the number of living, first-hand witnesses inevitably dwindles. Only by knowing the past can we protect our future, and we are deeply grateful to Chancellor Merkel for her commitment to the preservation of the site almost 1 million Jews were brutally murdered by the Nazis only and exclusively because they were Jews,” said Ronald Lauder.

Angela Merkel also saw brick prisoners barrack, the conservation of which took 4 years and was financed by the Auschwitz-Birkenau Foundation. She also saw a freight car standing on the unloading ramp, where starting from May 1944, transports of deportees entered the camp, consisting mainly of Jews, in particular from Hungary and the liquidated Litzmannstadt ghetto, but also among others of Poles deported to Auschwitz from the Warsaw Uprising. On the ramp doctors would select arriving Jews, usually sending the majority of deportees to immediate death in gas chambers.

Angela Merkel is the third Chancellor of Germany at the Auschwitz Memorial. It was previously visited by Helmut Schmidt and twice by Helmut Kohl.