7th Session of the International Committee of the Foundation 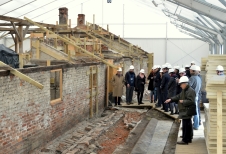 Representatives of the donor countries supporting the Auschwitz-Birkenau Foundation's Endowment Fund met on October 24 in Oświecim for the 7th session of the International Committee. They had the opportunity to see, for the first time the progress of conservation works at the former German Nazi concentration and extermination camp Auschwitz-Birkenau, which are funded by the Foundation.

The role of the Committee is to ensure that countries have full access to information on the activities and finances of the Foundation. The Committee also serves as an advisory and opinion giving body. It is composed of people recommended by individual countries. The meeting was also attended by the members of the Management Board, as well as employees of the Auschwitz-Birkenau Foundation and the Auschwitz-Birkenau State Museum.

'It is one thing to read detailed reports and financial statistics, and another to see on-site what we serve, how the conservation works are carried out, their significance and scale, what are the needs. Therefore, I thank you all for your presence here,' added Marek Zając.

Minister Beata Kempa, head of the Chancellery of the Prime Minister sent a letter to the participants: 'With the passage of time, there are fewer and fewer Survivors, witnesses to the history of genocide, with us. As the number of people who can give a personal testimony decreases, it has become increasingly important to preserve the buildings, ruins of the crematoria, the archives, objects left behind by the victims—at their place of execution—from destruction. They are for us and future generations, proof and reminder of the crimes borne out of the darkness of human insanity, drenched in racism, xenophobia and content for human life. It must recall the responsibility of the perpetrators and the incomprehensible suffering of their victims,' wrote Beata Kempa.

During the meeting, the members of the Committee were presented with a report on the substantive activities of the Foundation, as well as the financial statements and audits for the year 2016.

'Our priority is to ensure the security of payments received and the management of the fund in such a way that it generates stable and long-term profits without excessive risk. This makes it possible to finance conservation work in a continuous and predictable way. We attach great importance to the transparency of our actions as well as clear communication to donors on how we invest and use their donations. The Foundation's activities are also thoroughly audited each year by an independent auditor, who for the eighth time in a row has issued an unqualified opinion," said Maciej Antosik, Vice President and Financial Director of the Foundation, presenting the Fund's development and way of operating.

The financial declarations currently amount to approx. 112 million of the planned 120 million euros, while the accounts of the Foundation already indicate 104 million euros.

'We can rightly say from today that 37 countries already support the Foundation because the next donor country will be Greece. Talks are also in progress with several other countries, and last year Ireland increased its contribution to the endowment fund. At the same time, we are focused on extending our activities in the United States. In 2016, at the initiative of Ronald S. Lauder, the Auschwitz-Birkenau Foundation Committee was created in the US, made up of current donors to the Foundation. In the USA, Friends of Auschwitz-Birkenau Foundation is constantly active,' said the Director General of the Foundation Anna Miszewska, while summarising the activities of the Foundation in the last period.

During the meeting, the Deputy Director of the Museum and Vice President of the Foundation Rafał Pióro, as well as the head of the Master Plan for Preservation Agnieszka Tanistra-Różanowska summed up the status of preservation works conducted in the Auschwitz Memorial financed by the Auschwitz-Birkenau Foundation. This year, the contribution amount is estimated at 11 million Polish zlotych.

'I am thrilled that after years of presenting reports, we can now show you conservation works and our multi-disciplinary team, here, on-site. The professionalism of these individuals is a guarantee that these projects related to the preservation of authenticity are implemented at the highest possible level,' said, Rafał Pióro.

'Projects implemented with funds from the Foundation include among others, the conservation of about 16 thousand personal items from the archaeological excavations of 1967, which returned to the Memorial last year. The new warehouse for post-camp textile has been equipped with new, specialised cabinets for safe storage of historical objects. This year, we also completed the first stage of securing the ruined walls of the undressing room of gas chamber and crematorium IIat the former Auschwitz II_Birkenau camp. At the moment, we are preparing the documentation for further stages of the project, said Agnieszka Tanistra-Różanowska.

'Our most prominent project is, of course, the conservation of the brick buildings at the BI section of the former Auschwitz II-Birkenau camp. You can see two brick barracks currently undergoing conservation during this session. In addition to that, we are also securing the remaining historical buildings. We have also completed the pre-cleaning project of the interiors of all the brick barracks,'  added Tanistra Różanowska.

Concerning plans for the future, the President of the Foundation and director of the Auschwitz Memorial Dr. Piotr M.A. Cywiński said: 'We will soon begin the conservation of four successive brick barracks in Birkenau. It will concern buildings of various types: kitchen, disinfection station, latrines and another prisoners' barracks. In this way, we will become familiar with almost all types of historic brick buildings that will be secured in the future.'

'The work of the Foundation will be continued at both the level of states and individual donors. It is imperative, and by that, we are not talking about money here, but about the foundations of our world today. The number of states as well as the biographies of the individual donors who are committed to the Foundation’s mission play a key role and are an important signal to the international community,' emphasised Piotr Cywiński.

The 7th session of the International Committee was attended by representatives of the new donor countries: Belen Alfaro, Spanish Ambassador to the Alliance for Civilization and Inter-religious Dialogue at the UN, João Silva Leitão, Ambassador of the Portuguese Republic to Poland, and members of the Committee awaiting the official appointment by the Foundation Council: Ivan Jestřáb, Ambassador of the Czech Republic to Poland and Alexander Shkolnik, director of the Central Museum of the Great Patriotic War 1941-1945 in Moscow.