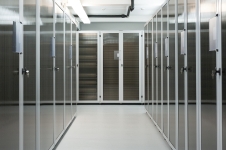 Almost 350 striped uniforms worn by prisoners of the German Nazi concentration camp Auschwitz, including 250 tallitot, civilian and children's clothes belonging to camp victims, primarily Jews deported for extermination, will be transferred to the modernised textile warehouse. The project was financed by the Auschwitz-Birkenau Foundation.

'To date, the camp clothes were folded and stored in boxes, while the tallitot were rolled onto small diameter rollers mounted in wooden cabinets. Storing them in such conditions could cause damage and significant adverse effects to the preserved fabrics. Therefore, in 2014 we began works aimed at creating new warehouses for textiles, and which the major task was the construction of specialised cabinets for storing textiles that complied with all conservation requirements,' said Magdalena Emilewicz-Pióro, a conservator and deputy head of the Collections.

The specialised cabinets are lockable, lightweight and safe, made from non-flammable materials that are non-reactive with historical objects. 'The cabinets are equipped with various storage systems for textiles, such as rollers, drawers and shelves. The cabinets were designed for the storage of specific types of objects,' said Hanna Kubik who coordinated the project in the Museum.

'Consequently, we will be able to minimise the destructive process of these highly sensitive objects,' added Emilewicz-Pióro.

Additionally, the storage rooms equipped with a fire-extinguishing system that is safe for the Collections have been renovated.

The recently completed modernisation of these warehouses is part of large-scale investments aimed at ensuring maximum safety of the archives and collections, constituting material evidence of victims of the former German Nazi concentration and extermination camp Auschwitz. Previously, changes were effected to the storage system for suitcases.