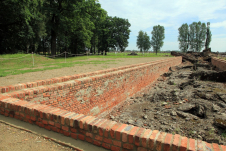 The conservation project has been completed on securing the northern and western wall of the ruins of the gas chamber and crematorium III undressing rooms on the site of the former Auschwitz II-Birkenau camp. The works were financed with funds from the Auschwitz-Birkenau Foundation.

The project began in August 2016. ‘The works consisted of performing below the ground level a special palisade of soil-cement columns reinforced with steel sections. The construction is designed to reduce ground pressure on the walls of the undressing rooms and also serves to anchor and secure the structures of the historic wall,’ said Jolanta Banaś-Maciaszczyk, the Museum’s Head of Conservation.

‘The structure of the wall has also been reinforced with horizontal seams, and a surface drainage has also been executed so that rain water can be conveyed from the area adjoining the endangered elements,’ added Jolanta Banaś-Maciaszczyk.

During the works, the relics of a brick sidewalk adjacent to the undressing rooms were discovered which have been inventoried and documented. ‘Until now we had no idea of the existence of a sidewalk surrounding the undressing rooms. The Sonderkommando prisoners never mentioned it, nor was it in any plans of the camp’s Bauleitung (Building Authority) It is yet another proof, perhaps not the most important, but very telling that many details remain to be explored, and an interdisciplinary approach may bring quite surprising results,’ stressed Museum Director Dr. Piotr M. A. Cywiński.

Conservation works were also carried out as part of the project, which included, the disinfection, reinforcement and cleaning of the wall, replacement of secondary joints, strengthening and securing of the plaster remains, filling gaps in bricks, and conservation of the stairs leading to the former undressing rooms, as well as securing the preserved metal elements, among others.

The gas chamber and crematorium III operated from June 1943 to November 1944. The building contained a gas chamber and five three-retort furnaces for incineration of corpses. At the end of the war, the camp authorities ordered the demolition of the furnaces and building in November 1944, as part of actions to destroy any traces of their crimes. Facilities they were unable to remove were blown up by the SS on 20 January 1945.

The project documentation for this task was financed by the Ronald S. Lauder Foundation while the works were implemented with funds provided by the Auschwitz-Birkenau Foundation. The objective of the Foundation is to create a Perpetual Fund for financing conservation works and preserving all the authentic remains of the former German Nazi concentration and extermination camp. Thanks to the annual interest, it is possible to implement the Master Plan for Preservation developed by specialists, i.e. a comprehensive multi-annual programme for preservation works at the Auschwitz Memorial.

Currently, the total sum of payments and declaration to the Fund is 112 million euros. The Foundation has been supported so far by 36 States and nine so-called Pillars of Memory, which includes donations from philanthropists.

Support for works related to the protection of the gas chambers and crematoria ruins at the former Auschwitz II-Birkenau camp by the Ronald S. Lauder Foundation began in 2004. Current activities at the ruins of the gas chamber and crematorium III are the continuation of works carried out in the years 2008-2009, when the walls of gas chambers II and III were secured. Then, a special protective structure was performed using the so-called micro piles technology. This method, which is designed to stop the pressure of the soil helps to protect the ruins of the underground elements of buildings from total collapse.