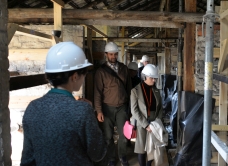 On September 27, 2016 members of the Council of the Auschwitz-Birkenau Foundation visited the Auschwitz Memorial and Museum. The Council controls and gives opinions on the entire work of the Foundation. The council is made up of persons acting to preserve the memory of the German Nazi crimes, historians and experts in finance or conservation, among others. Some of them are simultaneously members of the International Auschwitz Council.

During the visit, the guests focused on issues related to preserving the authenticity and remains of the German Nazi concentration and extermination camp. They visited among others, the Conservation Laboratories where preservation works are being conducted on suitcases belonging to Auschwitz victims, as well as on empty metal cans of Cyclone B. These works are financed by the Auschwitz-Birkenau Foundation.

The members of the Council also visited the Archives and warehouses of the Collections. They also had the opportunity of seeing the progress of conservation works in the brick barracks, and the securing of the ruined walls of the changing room of gas chamber and crematorium III, on the site of the former Auschwitz II-Birkenau camp. These works are also financed with funds from the Foundation.

‘The Council, acting as a control and advisory body is specifically informed about the activities of the Foundation, and ongoing preservation works. However, to reasonably perform this function it is important that we periodically visit the Memorial Site to see for ourselves and feel what it is the Auschwitz-Birkenau Foundation deals with on a daily basis,’ said Marek Zając, chairperson of the Council.

‘One may visit this place several times in a year, but the impression is always the same. The scope of work and technology is impressive, but what is most impressive is the commitment, knowledge and skills of the conservators working at the Memorial Site. At the Council sessions we can talk about statistics and documents, we can browse through photos, but in fact, it is here that we can truly see the significance of this work. What’s more – we can see what an invaluable work it is.’ said Marek Zając.

‘Diagrams, charts and sensible plans are not enough to devise a spending plan. You need to actually see, what is done with the money. It is not only the issue of devices and equipment for laboratories, but also the entire context of far-reaching plans that these objects will be stored in completely different and more appropriate conditions. It is not just a matter of maintaining existence, but also the preservation of the effects of conservation. Such a visit on-site allows us to actually see what we do, and will definitely be helpful during subsequent decisions on spending.’ said Prof. Edward Kosakowski