Financial Committee of the Foundation at the Auschwitz Memorial 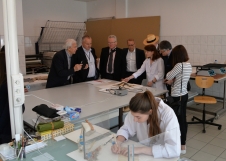 On 8 June 2016, an awayday meeting of the Financial Committee of the Auschwitz-Birkenau Foundation was held at the Auschwitz Memorial and Museum. The Committee's task is to advise the Management Board of the Foundation in matters related to assets, control of its activities, as well as the development of a strategy on how to invest funds accumulated in the Perpetual Fund.

The Committee is composed of international experts, bankers, financiers, economists and auditors:  Józef Wancer - chairperson and Alfred Finz, Włodzimierz Grudziński, Peter Hommelhoff, Antoni F. Reczek, Ekkehard Thiesler and Claude Trink. The basic principles of the Committee's work is to secure funds accrued by the Foundation as well as full transparency of its operations.

‘I am very pleased that the members of the Committee met for the first time at the Memorial site to see in practice, what the Foundation’s Mission is, and how the conservation works funded from resources accrued among others thanks to their knowledge and experience are conducted. They asked many questions and were very impressed with the professionalism of the Museum’s team. They were also overwhelmed by the magnitude of the tasks involved in preserving the authenticity of the former camp remains - said Anna Miszewska, Director General of the Foundation.

During the visit at the Memorial, the members of the Committee saw among others: The Museum’s Conservation Laboratories, accompanied by the Head of the Master Plan for Preservation Anna Łopuska and Head of the Laboratories Aleksandra Papis. They could also see among others, the process of conservation of children's shoes, archival documents, as well as empty cans of Cyclon B. The members of the Committee then proceeded to the former Auschwitz II-Birkenau camp site to see the ongoing conservation works on the two brick barracks funded by the Foundation.

‘It is very important to make people aware of the immensity of work the conservators undertake, because people do not realize how much effort it takes to preserve the authenticity of this historic place,’ said the chairperson of the Committee Józef Wancer, who congratulated the Memorial’s conservation team for the effects of their work.

At the brick barracks, the Commission could see, how the new digital conservation system for documentation works using photogrammetry and panoramic photograph, thanks to which all data on the works, and results of research works can be saved, as well as the results of subsequent stages of the conservation process. ‘With such a precise documentation, it will make work easier for next generations of conservators,’ said the Committee member Włodzimierz Grudziński.

Currently, the Fund has 98 million euro in its accounts; however, 112 million is the total amount of payments and declarations. 36 states and 9 so-called Pillars of Memory, which includes donations from philanthropists, have supported the Foundation so far. This year, the Foundation has allocated over 8 million Polish zloty to conservation works.